Australia now joins other countries including UK and New Zealand in officially recognising the deeds and sacrifices of our war animals serving alongside our troops with their own day of remembrance.

In 2019 Minister Scott Buchholts announced in Federal parliament that 24th February would be Australia's official war animal day. We are all being encouraged to wear a purple poppy in recognition of the deeds and sacrifice our four legged and feathered diggers have made and continue to make serving alongside our troops.

The president of the Australia War Animal Memorial Organisation and recent ANZAC of the year award recipient Mr Nigel Allsopp said "the 24th of February or purple poppy day is a day all Australians can wear a purple poppy and a time to think not only about our soldiers who gave their lives in war, but also spare a thought for the four-legged and winged hero's that fought and died alongside our troops". 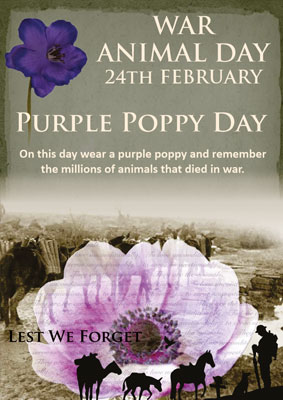 
See the announcement by MP Scott Buchholts address to federal parliament below;