The Australian War Animal Memorial Organisation Inc. (AWAMO) is a registered non-profit charity made up of community members from diverse backgrounds that have the likeminded aim to recognize the deeds and sacrifices of all animal species, who have given their lives and their loyalty, serving alongside their human comrades in wars and conflicts. AWAMO aim to educate future generations of the deeds and sacrifice made by all animals in service of our nation and seek to give a voice to those who have no voice.

Some of AWAMO’s achievements are:

Regardless of the effects of COVID-19 AWAMO had a big year in 2020, here are some of the activities we got up too.

Of all our War Animals none volunteered; they were all drafted and only a handful until recent times ever returned home." AWAMO is manned by volunteers and funds it's education, training and construction programs from the sale of its purple poppies. We cannot continue these programs without your support.


“It is our wish that next Memorial Day when we think of all our soldiers who gave their lives in war, please pause a thought for the four legged and winged hero's that fought and died alongside our troops. Hopefully one day we can not only stop sending our sons and daughters to war but our pets too”
Nigel Allsopp, founder & president AWAMO 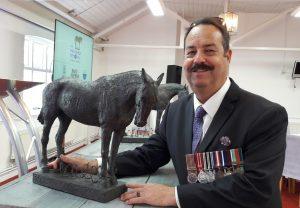